So yeah, even though I'm on a Mac, test and compare the two. Best of Luck. Biolumin3sc3nt wrote: Check out my new ReFill Rockmen: QVprod wrote: I mean it is doable, and I have been known to track at when I absolutely have to. But I prefer not to. With regards to this specific problem So it's not the case that Reason can't process live audio. 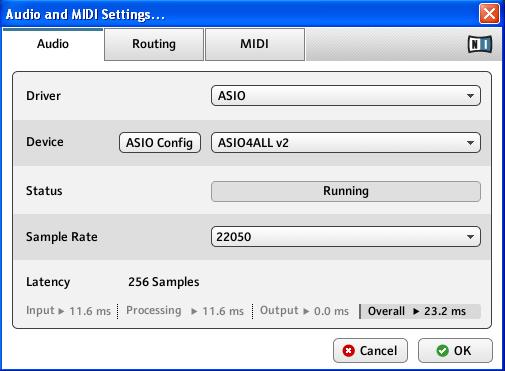 But rather that it's having trouble on your system for some strange reason. I have multicore on, and HT off in Reason. That allows me to run at 64 samples with the aforementioned plugins on an i7 MQ, which is a 4th gen 4 core chip.

Sometimes, under certain circumstances, I get a performance boost with HT on. To be totally honest I don't fully understand how it's implemented or how it relates to my project. I just have to change the setting from time to time but mostly it's off. But it sounds like you've checked all that.


Also check your sample rate. Super obvious but check your PC's power plan. Some DAWs, like Cubase, have the ability to switch the system to a high performance plan automatically. Reason doesn't, and sometimes I'll end up running in balanced or power saver mode and wondering why my performance sucks.

Also make sure that gfx and chipset drivers are properly installed, although tbh if it's working fine in other DAWs that might not have any bearing.

How To Fix Audio Interface Latency

The only other thing I can think is that for some reason that interface is performing poorly with Reason. Not sure if you were using it with earlier versions without issue though? I use Ableton Live and a couple of other minor programs in the background , with AmpliTube 4, Guitar Rig 5, and recently Syntronik loaded as plugins.

With Ableton Live set at a buffer size of 78 samples, it reports an overall latency of 5.

I've never bothered to do an independent measurement of the latency. When I'm at home I'll usually be connected to the Internet and sometimes might have Custom Shop open, but I get no audio glitches at these settings. Actually, I can get the latency down to about 3. Syntronik is on Track 3, and then I have two instances of Guitar Rig 5 on separate Send Tracks, each with only a single delay unit that I will occasionally route the melody strings through.

I also recently added the Ableton Live Looper to a 3rd Send Track, but I haven't actually experimented with it much yet and am not sure how much extra load it will place on the CPU. My effects are pretty minimal, I think. On the bass side I use the Ampeg collections. I used to use a clean tone on the bass side, but with the recent release of Ampeg collection 2 I'm enjoying a mild overdrive bass tone.

I generally find that it's best to turn off delay compensation when playing live through Live otherwise your guitar seems to get even more delayed to match effect chains on other tracks. For ultimate low latency a rack build pc with an internal sound card would be the best option. FireWire and USB will always impose extra overheads. And I would also say, go for FW, till the produce some "Thunder" compatible audio card under the zillions of euros. Allows effective bass playing, on the groove.

Course recording a clip has to be accompanied by the DEC, but still Samples per buffer. We are talkin live of course, in studio there is another process.

What I realised is that Guitar Rig is just too hungry for live use, assuming you have other stuff going on in your set beats, synths and the like. If you're using Live as a massive multi-effects rack and little else, you can get away with it but otherwise I'd say the first step is to move away from Guitar Rig. I'd put something like a line6 pod to do the GR job, and that'll take away processor load allowing you to run a tighter latency without getting clicks and pops.


My current method is to go into my interface clean Saffire 6 USB , then take a mono out to the pod, then from the pod to either an amp or a seperate channel on the PA. Doing it this way gives you or the sound guy more options for mixing the guitar in with the other stuff too.